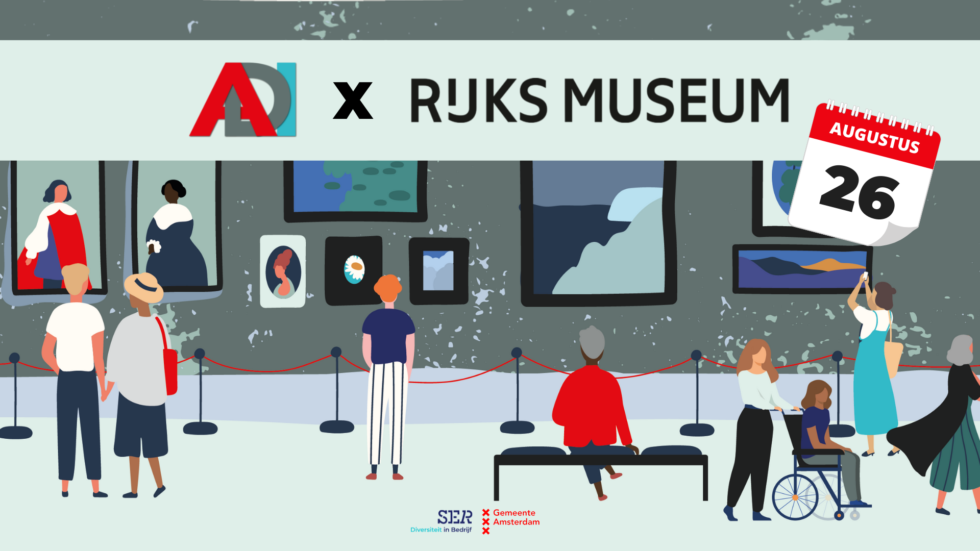 On 26 August, Port of Amsterdam, Athenaeum bookshops, Arkin, Dutch Startup Association, Hema, Sociale Verzekeringsbank, Melkweg, Rijnboutt Architecten and many other companies met to share experiences on diversity in the workplace. The meeting was organised by Amsterdam – Divers & Inclusive (ADI), a growing urban platform of over 100 employers from the city committed to an inclusive local labour market. Since its inception, ADI has played an important role in sharing experiences to attract and retain more staff from different backgrounds.

In the video below, much of the meeting can be watched back with subtitles!

Sherida Zorg, the museum’s diversity manager, moderated the meeting and put the question to the employers: How do we build together an Amsterdam labour market where everyone has a place? Director of the Rijksmuseum, Hendrikje Crebolder, gave an inside look at how the museum ensures that its audience and staff represent its population. Valika Smeulders, head of history at the Rijksmuseum, placed diversity in a historical perspective. Historical diversity, Valika Smeulders said, is by no means ‘something of the present’, and is therefore clearly reflected in the various works of art in the museum, such as the black king on ‘The Adoration of the Kings’ by Geertgen tot Sint Jans (c 1480) and the different skating social classes on Avercamp’s ‘Ice Entertainment’ (1615).

“Amsterdam has always known diversity, and could not have existed nor grown without it. Thanks to, not despite, the different groups that lived and worked together, Amsterdam has become what it is today.” – Valika Smeulders

Meanwhile, Amsterdam can be called a super-diverse city where diversity is the norm rather than the exception. The contemporary importance of a diverse and inclusive labour market was underlined by Rutger Groot Wassink, alderman for social affairs, diversity and democratisation:

“Diversity is a fact of life, but only by focusing on inclusion can we ensure that everyone has equal opportunities. No one should be left by the wayside, regardless of migration background, skin colour, gender, age, or any other characteristic that makes us who we are.” – Rutger Groot Wassink

Amara van der Elst echoed this in her spoken poem on freedom, saying that freedom is a privilege that gives some groups choices but other groups have much less of it. The programme then gave space to various companies and organisations, small and large, to share and discuss their plans and experiences around diversity and inclusion. For example, Dutch Startup Association, HEMA, and the Social Insurance Bank talked about what they have done in recent years to promote diversity and inclusion. Then Melkweg, Port of Amsterdam and Rijnboutt Architects interacted to discuss their future plans and concrete actions they are taking in the coming years to promote D&I. ADI policy officers Sarah Elbadr-Boers and Shivan Shazad led the signing of the Diversity Charter: Arkin Athenaeum Bookstores, Singel Publishers, Kit Royal Tropical Institute, and the Rijksmuseum itself. 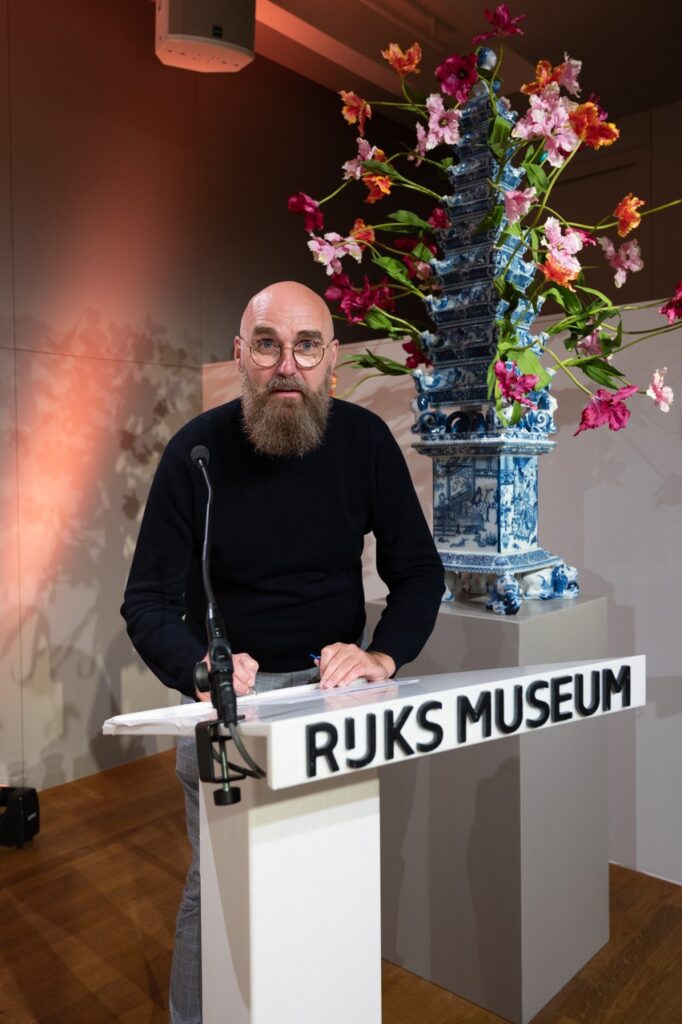 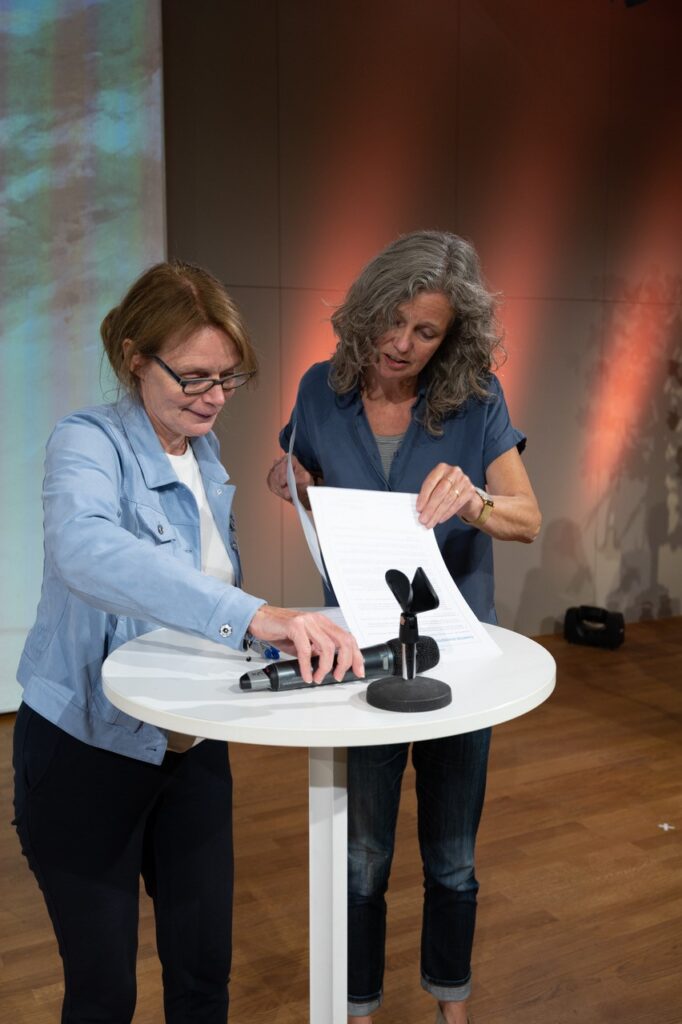 “We have recently made our recruitment & selection more inclusive by adapting our vacancy texts and partnering with a number of agencies specialising in diverse talent – this is already paying off, as we are already seeing a sharp increase in both the number of applicants and the diversity of candidates!”

Freedom is a word
heard differently by each ear
nipped in the bud here and there.

We celebrate in privilege
celebrate that some of us
no other
not knowing any better.

Freedom is a word without definition.
It is the space for what we do not immediately see.
It is a listening ear
For the unheard voice.
It is the right to the red pencil.
Decide for yourself whether or not and if so on which party.
Be able to say next week I will take time off
And then still put bread on the table.
Taking a gap year
hop on a plane
And not knowing where you end up.
It is studying
or your own path
direct your life
heft in their own hands.
It’s choice stress.
It’s not realising how blessed you are
That you have the choice.
It’s just what you want.
It is sometimes overwhelming.
It is realising how much you already have within yourself.

Freedom is something we still
can work on.
Like a colouring page
you can go outside the lines
but stay within limits.
Any colour may
as long as we don’t notice too much.

Freedom is forgotten
what was washed away in the grooves of paving stones.
The red washed out of clothes.
The blackness of the page swept away.
Sometimes you can still find spots in blank lines.
Freedom is sometimes reading around that.
Freedom is scrolling back
know better
rip off the plaster
in the cold air, wounds can heal better.
Freedom is forgiven
never a given.
Freedom is the freedom to take it for granted.

never a given.
Freedom is the freedom to take it for granted.
The river without banks
have everything
so also still needs.
It is not settling for.
It is self-determining where you make your point
Where you put a point.