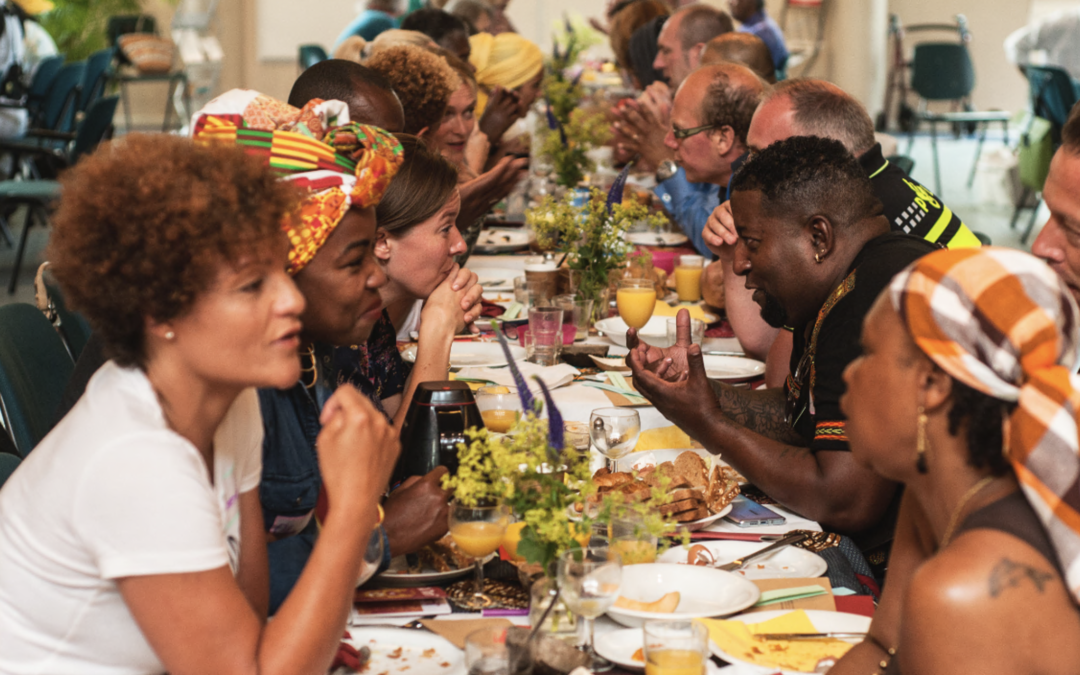 Every year on 1 July, much of our Dutch population celebrates Keti Koti. This Surinamese holiday celebrating the abolition of slavery literally means ‘the chains broken’ in Sranan, the second most spoken language in Suriname. 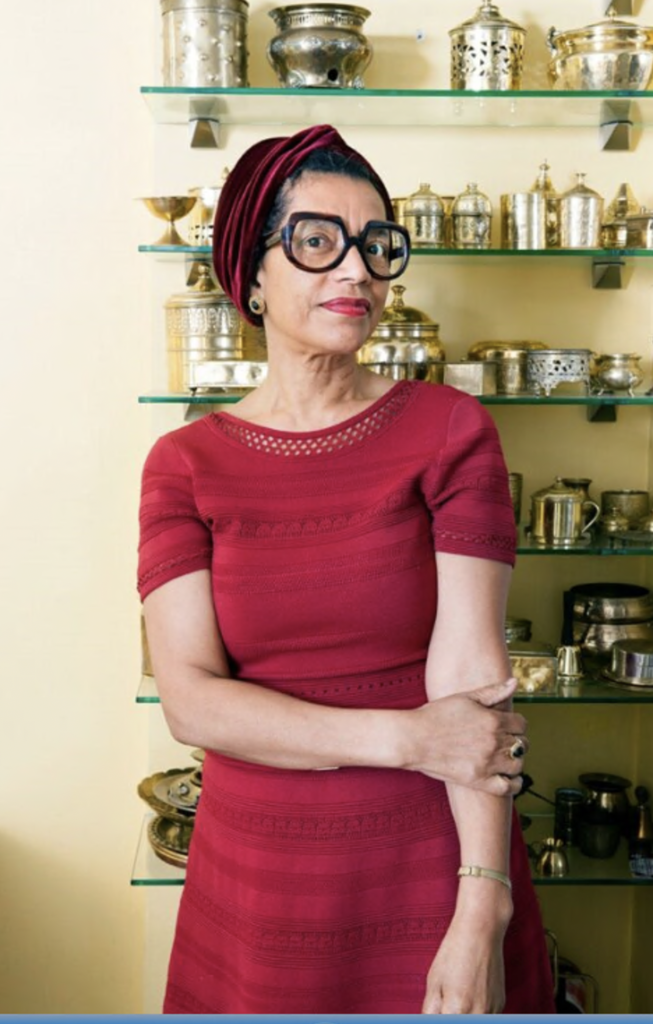 On the occasion of this holiday, Amsterdam – Divers & Inclusive spoke with Mercedes Zandwijken, director and founder of the Keti Koti Dialogue Table Foundation For over nine years, she has been working with her foundation to promote conversation about the consequences of our Dutch slavery past. Thus, she organises her Keti Koti dialogue tables throughout the country and now also on the shop floor within a variety of organisations. With success, as this year she was awarded the Ridder in de Orde van Oranje-Nassau for her militancy and special commitment to Dutch society. Mercedes is happy with the recognition but would have liked to have received structural support much earlier for her years of dedication. That may be forthcoming in the near future, as the debate intensifies to make Keti Koti a bank holiday.

Mercedes, how did you come up with the idea for this foundation?

Twenty years ago, I met my husband at a Jewish seider table, a table through which Jews commemorate being enslaved 3,000 years ago. Jewish families reflect on their (pre)history through rituals, symbols and songs. During the meal, dialogic conversations are held between different generations so that younger generations become familiar with their shared history as well as how they deal with concepts such as freedom and unfreedom in the present. I remember sitting there at the table wishing I had been familiarised with my history in the same way as a child. If I had been socialised in the same way, I might not have suffered so much from my own ‘colonial hangover’.

What do you mean by that?

It is the manifestation of the legacy of the slavery past that still lives on in our contemporary feelings and experiences, without us being aware of it. These remnants of mindsets from colonial times that continue to haunt us include our images of what is beautiful and ugly, who is smart and handsome and who gets to participate in decision making. Gloria Wekker calls this our ‘cultural archive’, a symbolic filing cabinet that sits in our heads, bodies and hearts and in which all our experiences are stored. Including those of 400 years of slavery and colonial past.

How do such experiences manifest in your daily life?

If I am walking on the market and buy a croquette with a napkin around it and this napkin falls, I will pick it up quickly out of automatism. In that moment, I experience fear that a bystander will immediately say “hey, here in the Netherlands we pick up a napkin if we drop this on the ground!”. So I anticipate people’s prejudices by performing my citizenship extra well. This creates a huge evidence drive and the added pressure. I always give myself 200 per cent in everything I do because I have to prove myself extra, and that entails working harder than is good for me. The Keti Koti Table is so successful in part because I do not wish to be judged by any prejudices whatsoever.

How does the Keti Koti table contribute to promoting dialogue about such biases?

The seider table inspired me to create a freedom table to celebrate the abolition of slavery. I wanted to make the traces of slavery visible and discussable with both black and white. And for this, I had two guiding ideas: it should be in the public space and black and white should sit opposite each other to have a deep conversation with each other about their personal dealings with this legacy. The table opens with an opening ritual where a choir sings songs that date back to slavery, the so-called songs of mourning and later freedom songs. This literally immediately sets a different tone. Next, black to white and white to black take turns rubbing each other’s wrists with coconut oil. This symbolises the pain from the past that is still felt by many in the present. In addition, we chew on a piece of bitter wood. This symbolises the bitterness of the slavery past. These rituals pave the way for an open and sincere exchange.

A special way of commemorating, also by involving the body that has been an important symbol for enslaved people. We do not know anything like this during the annual Remembrance of the Dead on 4 May…

This is an interesting observation. The commemoration of the dead is indeed an inward turning, seeking inner silence, with a rose or wreath laid down. The dialogue table brought about something else: white people came up to us afterwards and said “I shared something today that I have never said to anyone before”. And black people often commented afterwards, “it is rare that I was allowed to tell my story like this and in a way that made me feel that I was really heard”. This is because of the structure of the dialogue, where we take turns talking and listening with silences in between to reflect on the question and to think about what touched you most in the other person’s story and give this back. This makes the other person feel heard because they hear what their experience has triggered in the other person, and so recognition of the experience arises, which in turn leads to compassion. You put yourself in the shoes of your conversation partner.

Is this structure important?

Yes, it struck me that it is not natural for people to take turns talking and responding to each other’s stories. That concerned me because this is one of the marks of the slavery past. Black people have become enormously sensitive in sensing when you can or cannot say something because of this. Again, out of fear of doing it wrong. Hence, we applied this structure. It works well.

Amsterdam – Divers and Inclusive notes that companies are looking for ways to engage in dialogue, for example on Black Lives Matter. Can companies adopt this structure?

Today, we also give workshops to a variety of organisations. During the first three meetings, we focus on making everyone aware of their personal theme in dealing with the slavery past. This leads to very valuable conversations between black and white employees as both reflect on each other’s themes. Based on the first three meetings, we examine the most pressing theme for the organisation. Based on this theme, we jointly formulate dialogue questions looking at the past, present and future: ‘how did you deal with this issue in the past, how is it happening today and where do you want to go?’ The workshop ends in a Keti Koti table that they organise themselves for their own employees.

We will have a hybrid table in the courtyard of the Amsterdam Museum with a select group on 1 July. We are also offering Keti Koti dialogue bags. If people have ordered these bags, they will find supplies in them to set their own Keti Koti table at home and invite someone to it. The ingredients are for two people. Everything in the bag is there to sit at our table but from home. This way, we can still eat and engage in conversation with thousands of people. Over 2,000 bags have now been ordered. We have orders for bags from libraries, municipalities and from organisations from different cities. We further hope and expect that this year the municipality of Amsterdam will apologise for its role in the slavery past. The theme for the event at the Amsterdam Museum is therefore to collectively reflect on how we personally deal with making and accepting apologies. Based on this theme, we will invite people in the courtyard of the Amsterdam Museum as well as at home to discuss this.